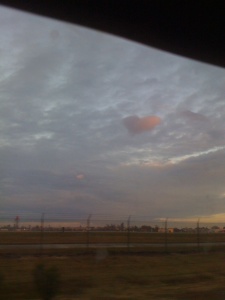 A few months ago, my oldest son was staying with a friend overnight;  the friend was bringing my son to the airport to catch a flight in the morning.  My son’s friend grew up Catholic, but had recently confided to my son that he no longer believed in God.  My son and his friend stayed up long hours debating God’s existence and other church teachings.  After much debate, the friend was still not convinced.  On the way to the airport the next morning, my son pointed to the sky and told his friend look at the clouds.  There in the sky was a perfect pink heart!  My son immediately told his friend, “God is telling you, He loves you, even though you refuse to believe in Him.”

What must one do to prove one’s love?  Is it not enough to give up your only son to be tortured and murdered?  Even though man has turned against God from the very beginning over and over again, He still loves us and invites us to share in His Love and Mercy.

Corinthians 13:7 “Love never gives up, and its faith, hope and patience never fail. Love is eternal.”

Psalm 104:3 “You use the clouds as Your chariot and ride on the wings of the wind. You use the winds as Your messengers and flashes of lightning as Your servants.”

Exodus 33:9 “After Moses had gone in the pillar of cloud would come down and stay at the door of the Tent and the Lord would speak to Moses from the cloud.”

Celebrate God’s love for you today!  Let Him into your heart!