Growing up in Cajun country, Good Friday was a day to attend church services at 3:00 and solemnly venerate the cross.  Once the service was completed, families gathered together for a meal (usually a crawfish boil), and then spent the rest of the day celebrating family and the upcoming Easter festivities.  Until I was grown with grandchildren, I did not fully understand the magnitude of what happened on the first Good Friday.  At that time, I chose to spend the afternoon taking my grandchildren to Good Friday services;  there would be no family gatherings for celebration until Easter Sunday.

A few years ago, I attended Good Friday services at St. Joseph’s Catholic Church in Milton, Louisiana with my nine-year old granddaughter and my six-year old grandson.  The church was dark and quiet.  My grandson, who was a very talkative young man, fell asleep on the pew not long after services began.  I did not wake him.  At the time of veneration of the cross, the congregation was told to remove shoes and walk up to the cross barefoot.  At that time I awakened my grandson and instructed this sleepy little boy to remove his shoes so that we can go up to the cross.  He was a little confused by all this, but I did not have time to fully explain. I got his shoes off, and then we were up and walking up the aisle to kiss the cross of Jesus.

My grandson was ahead of me and in no time at all, it was his turn to walk up and kiss the cross in veneration.  Now he was really confused.  He stood about 3 feet away and just looked at the cross.  My mind was racing….what should I do if he continues to just stand there! I had a real fear that he would turn around and ask me what were these people doing! Embarrassed that the line of people were being held up, I decided I would just walk ahead of him, kiss the cross and take him by the hand with me back to our pew.  No sooner had I made this decision; he finally took a few steps, softly kissed the cross and it was my turn. I really  regretted not talking to him about the service beforehand.  I had much explaining to do on the way home!

The following week I attended mass and apologized to Father.  I told him my grandson had been sleeping and was confused about what was going on during Good Friday service.  He immediately asked me if my grandson was the boy who just stood there looking at the cross.  I winced and told him yes, it was.  Father told me not to apologize; many people afterwards had told him they were greatly moved by seeing this young boy stand and look at the cross before walking over to kiss the wood.  He thought it very touching himself!  I was highly relieved and felt very foolish.  I had only seen my drowsy grandson holding up a line of devout Catholics wanting to venerate the cross.  God had it planned that everyone else saw how we should approach the cross – as a child, full of awe and wonderment.  A boy standing if front of his Redeemer.

Yesterday was Good Friday, 2020.  It will forever be remembered as the day mankind truly walked the Passion with Our Lord.  Never was there a time when the world felt so helpless, lonely and forsaken.  Yesterday afternoon, I spent time with Jesus and reflected on His sacrifice and the sacrifices forced upon mankind during this pandemic.  His great pain was not caused by the physical torture and crucifixion; but by the abandonment of His friends and the emotional torture of viewing His beloved mother’s anguished and deeply grieved face as she stood by Him through it all.

It is impossible to reflect on the passion of Jesus Christ and not acknowledge the suffering endured by His mother.  I can imagine in that walk to Calvary, Mary’s mind was flooded with memories of the baby she held in Bethlehem and presented in the temple; and the boy she nurtured, fed, and loved.  Others saw only a man.  She saw the Christ child that she was blessed to bring into this world; a world that hated and persecuted Him.  Mothers everywhere can sympathize with this holy mother of all mothers.  It was her baby boy on that cross.  I am sure she stood there confused by the angry mob and the hatred spewed out towards her Son, who was all good and loving.

This Holy Week, my heart has been pierced by the separation from my children and grandchildren.  I can do nothing but stand at the cross and pray for mercy.  I approach the cross as my grandson did those years ago – in awe and wonderment.  He is my redeemer.  By His stripes, I am healed.

In the end, this too will pass.  There will be a resurrection.  I will once again spend time with my family and friends.  I will not take that time for granted.  For now, I spend my days with Jesus and His mother.  They know my pain, because they lived it and so much more than I could ever imagine!

LORD BY YOUR CROSS AND RESURRECTION YOU HAVE SET US FREE! 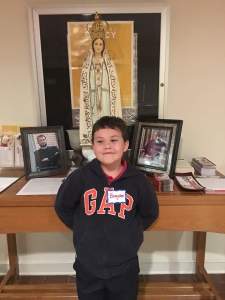 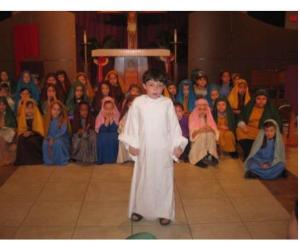 My grandchildren attend St. Bernadette’s Catholic School.  My granddaughter is in first grade and I was very pleased to hear the first graders were doing a passion play.

If you think children are too young to understand the passion and its meaning, think again.

This past weekend, the grandkids spent a night with their Grams and Pop.  Of course we watched “Frozen”.  They had seen the movie several times already and really were not paying much attention to it.  I lost interest as well.  But on Saturday night, we were able to watch “Mary, the Mother of Jesus”, a movie none of us had seen before.

Both the seven-year-old and the four-year-old were very captivated by the movie.  When Herod ordered the infants killed, my grandson became very upset.  Jesus was just a Baby and he wanted to know why they wanted to kill Him.  I watched as his sister explained that Mary and Joseph fled and kept Jesus safe.  After she thought about it, my granddaughter continued to explain to her little brother that eventually the people do kill Jesus and He dies on a cross.

Her little brother was still very upset.  He asked the big question, “Why did Jesus have to die on a cross?”.

My mind was racing…How do you explain this big question to a four-year-old?

But, the Holy Spirit was at work.  His big sister smiled a huge smile, and simple said, “JESUS HAD TO DIE SO THAT WE COULD LIVE!”

Words so simple and so true.  He died because He loves us.

Jesus gave this message to Nancy Fowler in Conyers, Georgia in December of 1990: “I give you the love of My Heart.  When you walk in My light you know the way.  Then you have My Peace because you are walking with Me.  When you have My Peace, you know of My Love.  I was brutally struck everywhere.  If you start to count My wounds do you not miss the point?  See not My wounds, but My Love for you and all of mankind.  See My love first, then My suffering.  The Cross is Life.  The Cross is Love.  I am the Cross.”

Philippians 2:7 : “He became like a human being and appeared in human likeness.  He was humble and walked the path of obedience all the way to death – His death on the cross.  For this reason, God raised Him to the highest place above and gave Him the name that is greater than any other name.  And so, in honor of the name of Jesus, all beings in heaven, on earth and in the world below, will fall on their knees and all will openly proclaim that Jesus Christ is Lord to the glory of God the Father.”