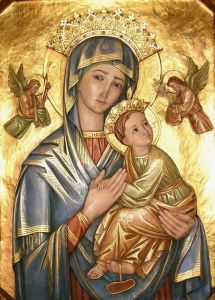 Luke 1:26 “In the sixth month of Elizabeth’s pregnancy God sent the angel Gabriel to a town in Galilee named Nazareth. He had a message for a girl promised in marriage to a man named Joseph who was  a descendant of King David. The girl’s name was Mary. The angel came to her and said, “Peace be with you! The Lord is with you and has greatly blessed you!”.”

Before God created man, He created the heavens and all things visible and “invisible”.  The angels were in existence long before man walked the earth.  Throughout the Bible the angels are seen as messengers and protectors.  They adore, glorify and praise the Creator.  These angels play a vital role in the journey of mankind.  As Catholics, we believe people are given a guardian angel from the moment of conception.  An angel to help protect and guide us on our journey back home to our Lord.

We know that Mary was approached by the Archangel Gabriel with the message that she was chosen to carry the Messiah.  I would love to believe that Mary’s special Guardian Angel was the Angel Gabriel.  One of only four Archangels, Gabriel was close to our Lord and would have stayed close by the Word made flesh.

I believe that Jesus had a very special Guardian Archangel as well.  The Archangel, Michael, is known to be the leader of God’s angels.  St. Michael is normally depicted in armor, fighting off Satan and his demons.  Never has there been such a temptation of man by the devil as when Jesus and His followers were tempted.  God would never have sent His Son to this earth to be lower than the angels for a time, without the proper protector.  This protector must have been St. Michael.

I believe Jesus, in His divinity, could see the angels.  He must have had a close relationship with both His mother’s angel, Gabriel and His own, Michael.  As revealed in the painting of Our Lady of Perpetual Help, these angels not only watched over mother and Son, they prepared them for what was to come.

Luke 2:13 “Suddenly a great army of heaven’s angels appeared with the angel, singing praises to God: “Glory to God in the highest heaven, and peace on earth to those with whom He is pleased!”.”

One thought on “Jesus’ Angel”